The Panther tank was seen as a necessary component of Operation Zitadelle, and the attack was delayed several times because of their mechanical problems, with the eventual start date of the battle only six days after the last Panthers had been delivered to the front. This resulted in major problems in Panther units during the Battle of Kursk, as tactical training at the unit level, coordination by radio, and driver training were all seriously deficient. 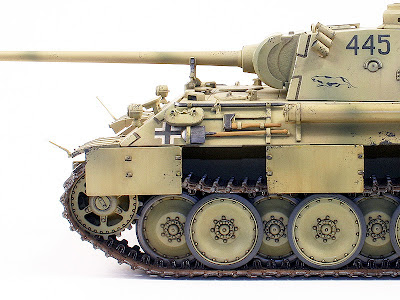 It was not until June 23–29, 1943, that a total of 200 rebuilt Panthers were finally issued to Panther Regiment von Lauchert, of the XLVIII Panzer Corps (4 Panzer Army). Two were immediately lost due to motor fires upon disembarking from the trains. By July 5, when the Battle of Kursk started, there were only 184 operational Panthers. Within two days, this had dropped to 40. On July 17, 1943 after Hitler had ordered a stop to the German offensive, Gen. Heinz Guderian sent in the following preliminary assessment of the Panthers:

Due to enemy action and mechanical breakdowns, the combat strength sank rapidly during the first few days. By the evening of 10 July there were only 10 operational Panthers in the front line. 25 Panthers had been lost as total writeoffs (23 were hit and burnt and two had caught fire during the approach march). 100 Panthers were in need of repair (56 were damaged by hits and mines and 44 by mechanical breakdown). 60 percent of the mechanical breakdowns could be easily repaired. Approximately 40 Panthers had already been repaired and were on the way to the front. About 25 still had not been recovered by the repair service ... On the evening of 11 July, 38 Panthers were operational, 31 were total writeoffs and 131 were in need of repair. A slow increase in the combat strength is observable. The large number of losses by hits (81 Panthers up to 10 July) attests to the heavy fighting.

This is the 1/35 Dragon Panther D Premium kit, modeled to represent one of these brand new Panthers that was sent to the Kursk front, as it may have looked after only a few days off of the train. It is finished with Tamiya and Vallejo acrylics and sparingly weathered with MIG products. I have added a few mods from Tiger Designs (turret hatch and rear turret armor), and Fruil tracks. 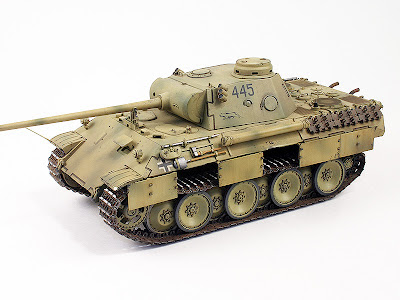 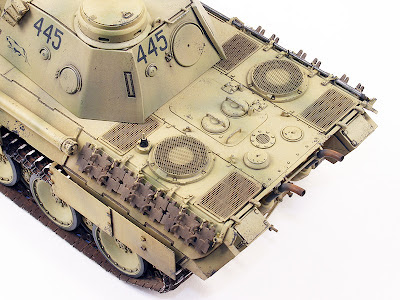 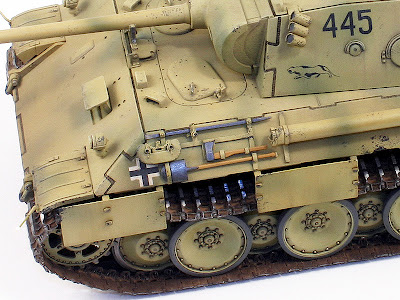 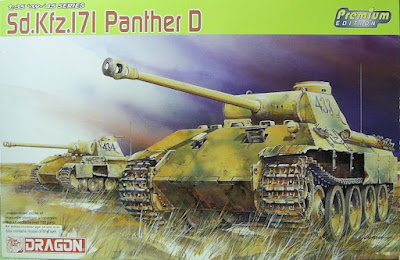